A squid propels itself by filling its body with water and ejecting it backwards in order to move forwards. This is the principle used by rocket engineers. Space rockets use fuels that are burned in a chamber shaped rather like a bottle, with the neck pointing backwards. The burning fuel produces a large quantity of gas that is further expanded by the heat generated and this is ejected through the neck (or nozzle) of the “bottle” (normally called the combustion chamber) at a very high velocity, propelling the rocket in the opposite direction.

The Rokit, like the squid, uses water as the driving agent and compressed air instead of heat to provide the energy.

For the technically minded the pressure in the bottle at launch (just before the brass bung releases) is about 18 x 104 N/m2 (or about 25 psi). 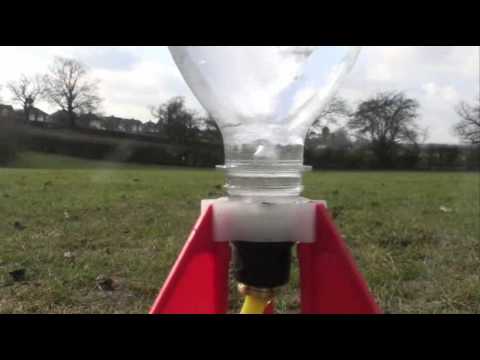 The water is forced through a nozzle with a cross sectional area of about 1cm2 and this produces a theoretical thrust of about 18 Newtons (about 3.9lbs) at launch. As the water is ejected the ROKIT gets lighter resulting in an increased acceleration or ‘g’ force. This increasing ‘g’ force is one of the more unpleasant aspects of space flight that astronauts have to endure; a rocket leaving the earth’s atmosphere would have to keep up this increasing acceleration for some time.

The Rokit expels its charge of water in about 1 second so DON’T WORRY, IT’S NOT LIKELY TO GO INTO ORBIT!

GOT A QUESTION?
Try our FAQ's

Get Your Rokit Kit

For outdoor use ONLY

WARNING: NOT A TOY.
TO BE USED UNDER DIRECT SUPERVISION OF AN ADULT